Interview with Pavel Hanych, the new Head of the Ecumenical and International Relations Department of the ECCB Central Office 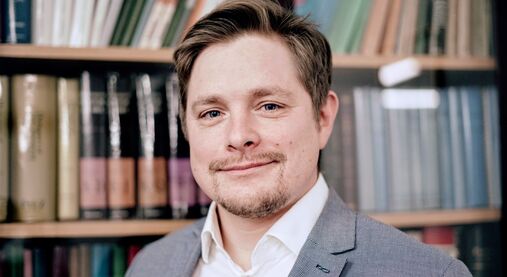 March 30, 2021 - We should have an understanding of the complexity of interpersonal relationships and the diversity o

Pavel Hanych (37 years old) studied Protestant theology at Charles University in Prague. For 10 years, he worked at the ECCB Diaconia headquarters, most recently as the Head of the Communication Department and as a Press Spokesperson. He is ordained as an assistant preacher of the ECCB and he also coordinates the publication of the new evangelical songbook. Music is his biggest hobby, he has been pursuing it since childhood. He studied violin at a specialised music primary school. He and his wife Klára are raising a 1.5-year-old son Pavel.

Ecumenical and international relations – that sounds a bit bureaucratic. What exactly can we imagine under that?

From its beginnings, the Evangelical Church has strived for dialogue and a common path of Christians, despite the diversity of traditions and emphases of individual churches. Our job is to help. Firstly, here in the Czech Republic, in our rich but at the same time fragile ecumenical relations. And then abroad, where we have strongly developed partnerships and friendly relations with many churches: In addition to numerous visits, internships, study or work stays, we support each other and share best practices in many areas of church life. And, of course, we do not want to stay only at the borders of the churches, and here I see a third pillar of our work – in relation to the public: to open important social, ethical or political issues, to defend minorities or people on the margins of society. We want the church to be an open and safe place for everyone. In cooperation with the Synod Council and the Media Department, we are thus involved in making our voice heard in this field as well.

You studied theology, prepared for the parish service and, above all, worked for a long time in Diaconia. How did it equip you for your current job?

I definitely like the knowledge of the church environment that I acquired during my studies and while working in various church committees. Ten years in Diaconia was a very precious time, it’s where I learned that even a minority church, actually a very small one, is able to establish an organsation that is one of the leading and respected providers of social services in the Czech Republic and operates even abroad. Although Diaconia has outgrown the Church in many quantitative parameters, it has never strayed from it and is very much in favor of a good relationship with it. Engaging in Diaconia certainly also strengthened my social sensitivity. Despite the progress and the society living in relative peace and wealth, there are still a lot of people, families, children in our country who have a very difficult time in their lives. I learned that even the church should not live in its own social bubble. That it should be open, sensitive, accepting, not judging. That it should act as a safe background even for those who are not mainstream. I’ve learned that it already works this way at many points at ECCB, but we still need to keep that in mind.

What are the three most important tasks ahead of you now?

Getting to know international relations in times when the world is somewhat closed is not an ideal starting point. We gradually invite foreign partners for online coffee, we meet through monitors and get to know each other informally. Secondly, to record the three areas of our work – internal ecumenism, international relations, society – and to set goals, priorities, to think about how to further develop them. It also takes a lot of time, because in addition to that, we are constantly dealing with the daily executive, which is surprisingly time-consuming even in times of COVID-19. My wonderful colleagues in the team provide great support to me in this. The third task is more personal – in the coming months I would like to move my German to a better level, because in addition to English, it is a key language for many meetings of our department.