#Faculty  After eight years, senior lecturer Jiří Mrázek is leaving his position as head of the Protestant Tehological Faculty of the Charles University and is being replaced by his colleague from the New Testament Department, Jan Roskovec. He took up the dean's post today after his appointment by the rector Milena Králíčková. One of the plans he would like to develop at the faculty is the introduction of a tutor-specialised research master programme. 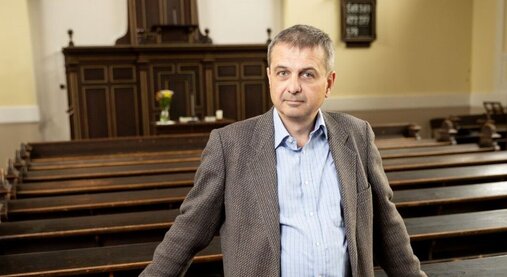 July 1, 2022 - The Protestant Theological Faculty has a new Dean - Interview with Jan Roskovec

You took up the position of dean from your previous position of vice-dean for foreign and ecumenical relations; the former dean, Jiří Mrázek, is actually your colleague from the department. Over the years, you have had the opportunity to see what it’s like to work at this position. Why did you decide to stand as a candidate?

In our circumstances, it’s a bit of an overstatement to say that I decided to be a candidate. I started considering the option when the Academic Senate of the PTF CU approached me, asking me whether I would accept the candidacy. At our Faculty, the Senate usually prepares a sort of opinion poll before the election and everybody can propose the personality they would like to see as Dean of the Faculty. The Senators then approach the nominees. This is how they approached me and I had no serious reasons against running for the position. 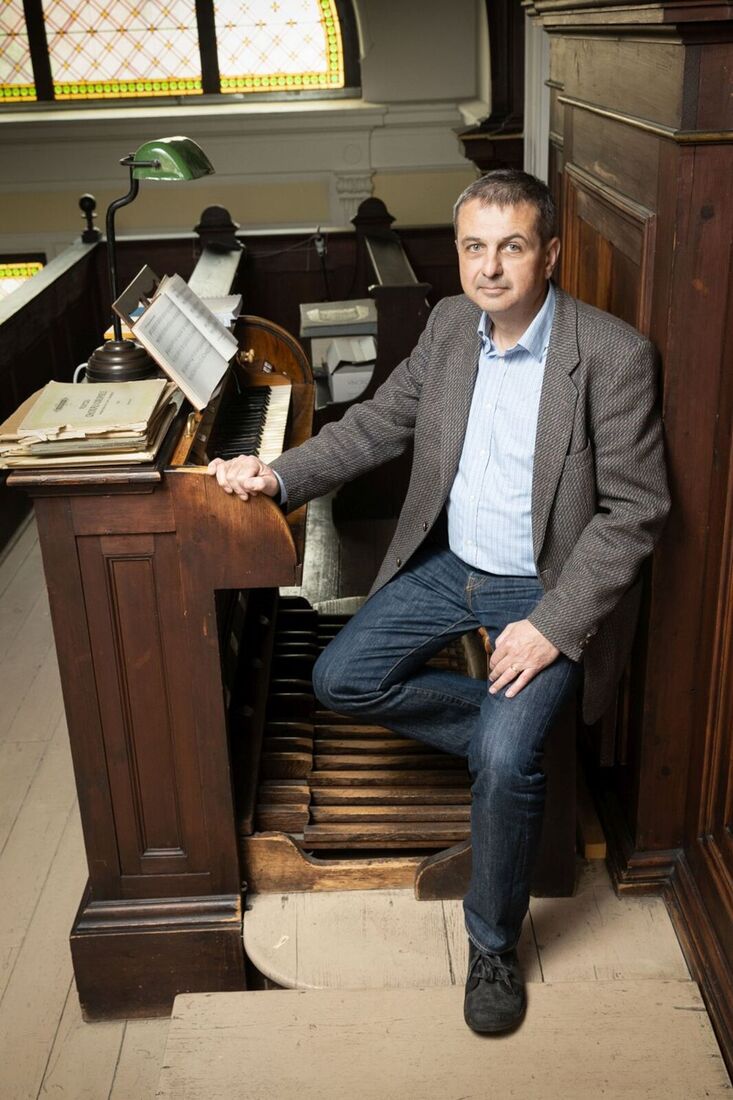 What direction should the faculty take under your leadership?

Before the election, I indicated that I had no reason to implement any fundamental changes to the direction in which the faculty is headed. The basic boundaries of our path are determined by the nature of our work. They are defined by our relationship to the church on the one hand, and by our relationship to the University and the broader public on the other hand. It has been working quite well given these coordinates. However, the times are changing and that is what we need to react to. We would like to focus more on applicants from abroad. We have a newly-accredited programme in English, reflecting the Czech way of teaching Protestant Theology. This academic year we opened the first year of the bachelor’s degree. We have not yet admitted anyone to the master’s degree. So far, applicants from abroad (mostly from Africa and Asia) have not met our requirements for master’s degree students, primarily the knowledge of ancient languages - Latin, Greek, Hebrew. This is not usually taught at the lower levels of study in the countries where they come from.

How do you reach out to students in Asia and Africa interested in studying Protestant theology?

There is quite a high level of interest, the applicants from abroad usually find out about us on their own. Those searching for study opportunities in Europe find us quite easily. We do our best to advertise our Faculty and we also intend to use our church’s contacts, because most of these applicants are interested in preparing for work as ministers, and they usually belong to a church. The Evangelical Church of Czech Brethren, which is our main partner church in the Czech Republic, has very wide international contacts.

You mentioned in your election programme that you would like to introduce a research master programme. What would that be?

A research master programme not an original invention; it is offered regularly by theological faculties in the West, in Germany or Holland, for example. My point of view is that every discipline, and theology as a humanities discipline in particular, can be studied with two different approaches. The most common one is that you cover the encyclopaedic knowledge of what you need to learn within the given discipline and then you focus on something specific. However, you can also do it the other way around: you choose a topic you are interested in and you would like to study more in depth, and then you learn the broader context. The one- to two-year programme would be organised individually, with each student given a tutor whose task would be to guide the student's work and design a curriculum for them. In that way, it would be slightly similar to a PhD.

The student chapel in the basement of the PTF CU has already undergone renovation (pic #1). The Faculty Library has yet to be renovated (pic #2): 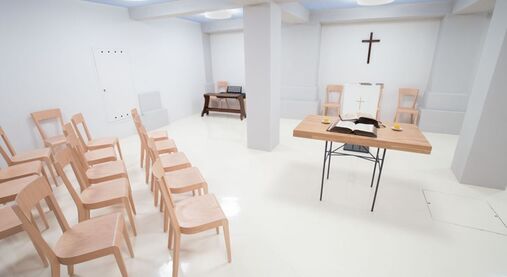 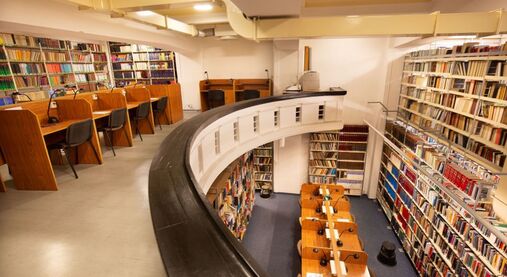 Senior lecturer Filip Čapek from the Department of the Old Testament, together with his colleagues and students, is participating in a very successful archaeological research in Israel. When I talked to him about it, he complained about how much energy and time it takes him to raise money every year to participate in the project. How do you want to approach faculty funding as dean?

As a small faculty, we have been struggling with financial problems and shortcomings since our incorporation into the university. For years, more than half of the faculty budget has been covered by research money, that is, grants. It's a constant uncertainty, you never know which projects will work out. Moreover, in recent years the success rate of applications has been much lower in percentage terms, which is due to the fact that the financial subsidy has not increased much, but the number of programs that are paid from it has increased. Financial issues are there to stay, I suppose, and we have to deal with them one way or another. In the current situation, it is clear that we cannot expect any fat years in the near future. In addition, the faculty building is to undergo a significant renovation. The university management has been helping us with this and the former rector, professor Tomáš Zima, has been encouraging us very intensely. However, it is of course very demanding in terms of the funding.

As vice-dean for foreign and ecumenical relations, you wrote to the Moscow Patriarchate in connection with the outbreak of the war in Ukraine to “use the full weight of the authority that it has in the Russian Federation to stop the fratricidal attack on Ukraine”. Did you ever get any response?

I never did, and to be honest, never really expected to get one.

The Protestant Theological Faculty of the Charles University also spoke up more openly at the time of the Winter Olympics in Beijing, when it flew the Tibetan and Uyghur flags at the urge of the Academic Senate of the PTF CU. Today, the Ukrainian flag flies on the faculty building. Do you think the voice of the PTF CU should be heard more in the public space?

The events you mentioned are all extreme situations, in my view. In such situations, it is appropriate to state clearly which side we are on. Universities, on the other hand, are a place of very diverse debate, not only in terms of subject matter and expertise, but also in terms of worldviews. This has always been the case and I would like it to continue to be so.

You have quite a busy teaching schedule, and you're doing research at the same time. How do you plan to combine that with your dean's duties?

I suppose I’ll have to cut back on my teaching a little bit. I wouldn’t want to stop teaching completely, though. It’s not the custom here, and it would cause quite a problem, because there aren’t so many of us here. I also wouldn’t like to give up on my research completely. There is a connection with the teaching. Especially in my lectures on exegesis, i.e., the interpretation of biblical texts, I always try to bring something new that I have researched, some new perspectives on individual issues, into my teaching. I would really like to keep this part of my teaching. 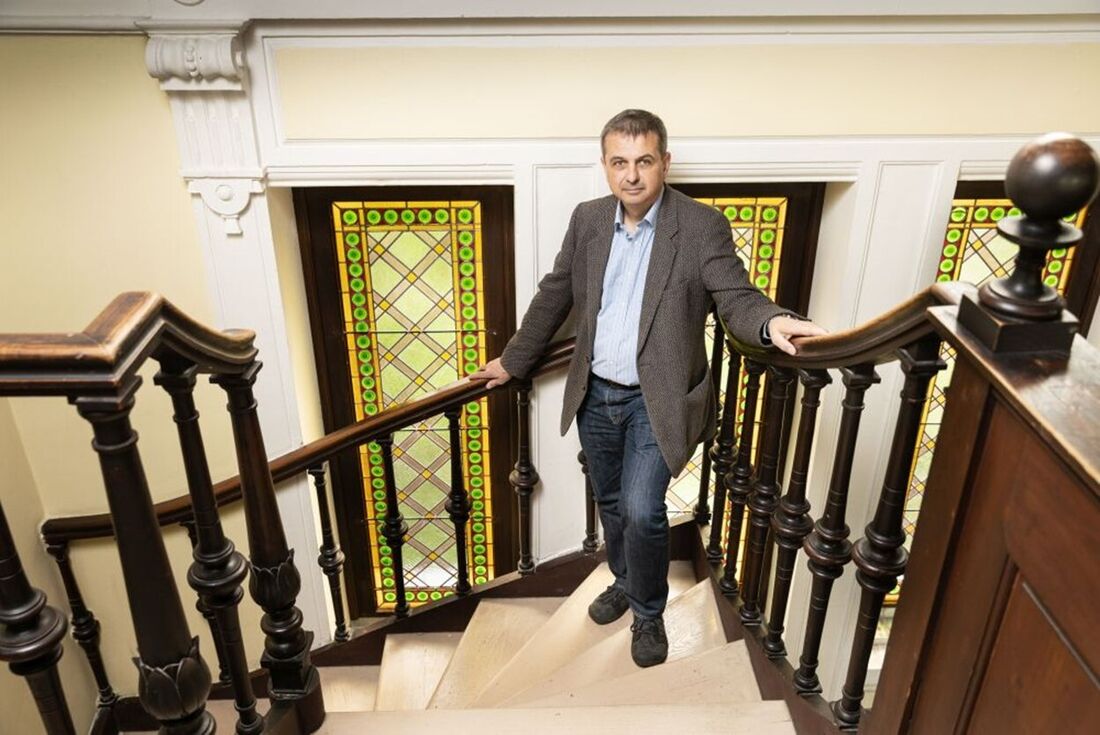 In 1989, you went to Cambridge to study. How did you manage to get into a Western university before the fall of the Iron Curtain?

Until 1990, our faculty was an independent institution not belonging to the Charles University, which gave it a certain degree of freedom. The faculties of theology were perceived as ecclesiastical institutions, and for this reason they fell under the administration of the Ministry of Culture, not the Ministry of Education, just like the churches. From time to time, there would be certain periods during which it was possible to send students to Western universities. These time windows included the late 1960s and the late 1980s. I had that opportunity and I was not the first; a year before me, my classmate got into Cambridge as well. I left in September 1989 and returned in May 1990.

What requirements did you have to meet in order to be able to leave?

I had to apply for all sort of permits, including a visa and a foreign exchange clause. Permission for study travel was arranged by the faculty through the Ministry of Culture, so it was a slightly different, probably less guarded route. I received a scholarship from the British United Reformed Church. This also enabled me to study at the college that this church has in Cambridge.

Leaving to the UK in September 1989 must have been a great experience for you. What did you take away from the trip?

Several boxes of books. The local student union had a regular book fair on campus. Every week in the common room, they would line up a number of books from various estates to be auctioned off. Nobody wanted German books, so I got some publications that were very valuable to me at a very cheap price. Students nowadays can’t quite relate, because they can find anything in their computers. To us back then, however, the library was everything. In addition to that, I was preparing for my work as minister. That meant I would probably have to work and live outside of Prague. If you wanted to work as a theologian, you were dependent on the sources you had at home.

In the nineties, you were working as a minister. What brought you back to academic grounds? You did not defend your dissertation until 2003.

I was already working on my dissertation as a minister. But the progress was very slow, I didn't have much time for specialised work. Eventually, my teacher, Professor Petr Pokorný, who introduced me to New Testament Biblical Studies, encouraged me to pursue teaching, and so I returned to academia.

Mgr. Jan Roskovec, Ph.D. is a graduate of the Comenius Protestant Theological Faculty (currently the Protestant Theological Faculty of the Charles University /PTF CU/). He also studied at the universities of Cambridge and Erlangen. In the 1990s, he served as a minister of the Evangelical Church of Czech Brethren in Český Brod. He later returned to the PTF CU and completed his PhD in theology. He specialises in the New Testament, especially the interpretation of the Pauline and Johannine writings. He is the director of the Centre for Biblical Studies, a joint department of the Charles University and the Academy of Sciences of the Czech Republic. Jan Roskovec took over the leadership of the faculty for the next four years at the beginning of June.